How Does Military Divorce Work? 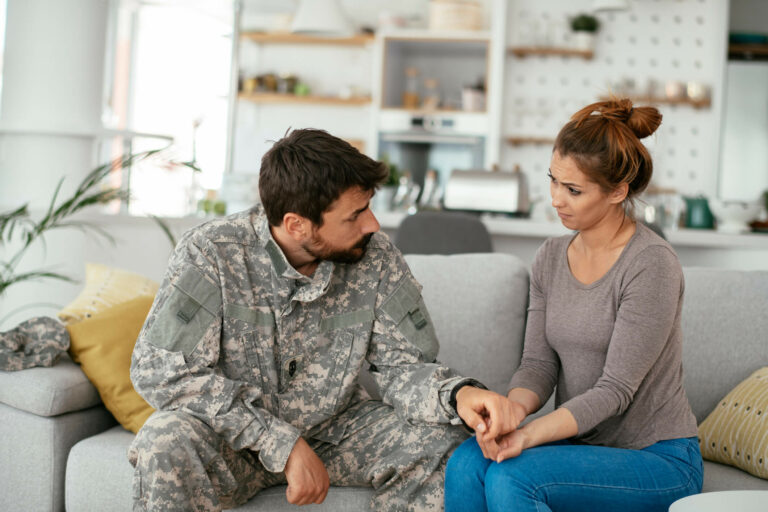 If you’re facing a military divorce, you may feel worried and unsure of what to do. Military divorces share some similarities to regular divorces, but have key differences that can affect your outcome.

How Is Military Divorce Different than Civilian Divorce?

The biggest difference with military divorces is that one or both spouses are in the military. Other significant differences include a choice of jurisdiction when filing for divorce, the amount of time the divorce can take, how assets and benefits are divided, and how child custody is handled.

We can connect you today to a local military divorce lawyer.

In a civilian divorce, spouses are usually subject to the laws of the state in which they reside and have filed for divorce.

In a military divorce, state law also governs most aspects of the divorce case, including alimony, child custody, and division of property.

It is essential to have a lawyer that understands both sides of the law, as state and federal laws come together to play an important role in military divorces.

Previously a residency requirement for military divorces applied, but many states have eliminated such requirements.

Generally, spouses have a choice when deciding where to file for divorce:

Once the divorce is underway, it is similar to a civilian divorce. Spouses commonly ask the court for temporary orders until the divorce is finalized. These orders can address many key issues in a divorce, including possession of the marital home, spousal and child support, and child custody.

The spouses may decide to attend mediation or attempt to reach a resolution outside the courtroom. If they are unable to do so, both spouses may have to attend a trial in an effort to finalize their divorce.

Exact divorce processes will vary depending on the state in which you file. Divorce laws and procedures differ between states.

Because spouses in the military are often in a unique position, the Service Members Civil Relief Act (SCRA) serves to protect military spouses going through a divorce.

In a divorce proceeding, when the petitioner serves the respondent, the respondent is expected to file a response with the court and attend any and all court appearances. If they fail to do so, consequences may result. Depending on the state, a spouse that fails to file a response and/or attend court appearances is protected from facing repercussions or a default divorce decree.

The SCRA provides military spouses with a “stay,” or postponement, of any legal proceeding if they are unable to attend for valid reasons.

It is important to note that the SCRA does not entirely excuse military spouses from participating in their divorces altogether. It is simply a safeguard should the spouse be unavailable under military orders of some kind.

Military Pension and Benefits in a Divorce

Military pensions can be divided between spouses during a divorce, but they are handled in a unique manner.

The Uniformed Services Former Spouses’ Protection Act (USFSPA) governs military pensions. Depending on the location of the divorce, the Act allows the state court to decide how to divide them. The Act does however prohibit the state court from awarding more than 50% of the “disposable retired pay.”

Pension Payments and the 10/10 Test

A military spouse’s ex-spouse is entitled to a portion of the military pension if they pass the 10/10 test.

The 10/10 test dictates that if the military spouse has served in the military a minimum of 10 years and the parties were married for at least 10 years, the military spouse’s ex-spouse is entitled to part of the pension. The Defense Finance and Accounting Service (DFAS) is responsible for dividing the pension and sending each party their respective portion monthly.

Aside from pension benefits, former spouses of military members may be eligible for other benefits, including medical. To qualify, they must meet these criteria:

The Uniform Services Former Spouse Protection Act is a federal law that dictates the benefits a military personnel’s former spouse is entitled to if they meet the 20/20/20 rule. The ex-spouse can retain these benefits unless and until they decide to remarry.

Child support calculations depend on the method your state uses. For military divorces, calculating child support may require additional considerations, such as base pay.

Calculating child support will depend on the usual considerations, including income and need. Determining if a spouse owes child support and how much will typically depend on a mix of state guidelines and military-specific factors.

Child Custody after a Military Divorce

In general, in a military divorce involving children, a parenting plan must exist. It is critical for families to have a parenting plan because one parent being in the military can have a drastic impact on child custody and visitation.

Divorcing spouses should come together to create a detailed family plan if they share children under the age of 18, regardless if one spouse is in the military, or both. The parenting plan can include specifics:

Child custody in a military divorce can be overwhelming and stressful. Both spouses must come together and do what is best for the children.

Do I Need a Military Divorce Lawyer?

A military divorce lawyer is not mandatory, but having one benefits you. Because military divorces are different in many aspects, it can be hard to know what steps to take to reach a fair outcome.

If you need help during your military divorce, discuss your case with an experienced attorney in your state.

Consider an Unbundled Lawyer To Help with Your Military Divorce

Military divorce lawyers can come with high price tags. You may feel you need the guidance but may not have the resources available to hire an attorney. In these situations, an unbundled lawyer can be your best solution.

If you wish to save money on legal services and have assistance at designated times, an unbundled lawyer may be the answer. Your lawyer will only handle the critical portions of your case, keeping costs low.

Unbundled Legal Help can match you today to a local unbundled lawyer with military divorce expertise. Whether you need limited help or more extensive representation, we can provide a lawyer that suits your needs.

If you’re facing a military divorce, you don’t have to do it alone. Contact us today to get started.

Is it A Good Idea to Put Your House in a Trust?

Can Child Custody be Appealed?